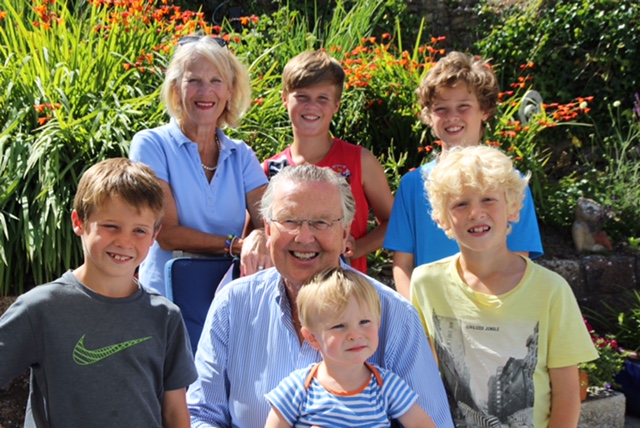 Kind, wise and passionate-three simple but powerful words used to describe a wonderful man who sadly passed away on February 9th.

David Charles Arnold, 70, wife of Isobel to whom he’d been married since 1971. Father to Louise, Stephen and Caroline and grandfather to Oscar, Jacob, George, Will and Jack will be missed by a great many people throughout the area and beyond.

David was born in Prestwich in 1947, moving to Devon at a young age, firstly to Dawlish Warren and soon after Salcombe. After attending Kingsbridge Grammar he moved to London to attend college prior to travelling the world with his career.

He worked for Avon Cosmetics for 23 years starting as a Campaign Planner covering Ireland and Sweden and eventually working his way up to become President & CEO of Avon Japan and North Asia. David also spent time as the CEO for the UK, France together with roles in New York and Hong Kong.

David’s son, Stephen, said the wide variety of travel meant he and his siblings had a “fantastic childhood” travelling all around the world.

But David truly loved the South Hams, particularly Salcombe and his dream home.

Stephen remembered his grandmother and David’s mother, Hilda, telling a story about how David first fell in love with the property. According to Hilda, when David was just four, on climbing Spion Kop steps past his dream home he said how great the views must be from the house.

Then, years later while visiting his mother, David saw the house was for sale and bought it as his “dream retirement home” explained Stephen.

In 1996, David returned to Devon where he made his mark on the South Hams. He was a governor at KCC for fifteen years and chair for eight of those, working alongside former principal, Roger Pope. Roger commented on how, “he believed in excellence” which made sure he provided a “very good challenge in the school to make it outstanding” commented Roger.

“He was a fantastic man to work with, with such a wide experience in business and life” which he brought to the board of governors.

“David was a very good listener and his wealth of knowledge and experience meant he always gave a well thought out answer to any dilemma which is why I would describe him as a wise man.”

“It was a privilege to work with David. He understood how to give us unconditional support and yet still robustly challenge us to do better and better for the young people.

“He wanted them [the students] to have the very best opportunities to give them the best possible start in life. He was an unfailing source of wisdom and advice.

“I am very grateful for all that he has done for the students and for me personally. He was a kind, wise and great man.”

In the 1990s and 2000s David also became heavily involved in three other businesses, all key parts of the community – Marchand Petit, Wills Marine and Peninsula Care Homes.

David’s time in Japan, a society known for their care for the elderly, ultimately led to the establishment of Peninsula Care Homes (PCH) in 2002 of which David remained Chairman until his passing. Managing Director Louise Arnold said it was her father’s vision for PCH, “to be first for care” across their 4 residential and 1 nursing home across Devon. David’s belief that good wasn’t good enough has led to the company continually investing & striving to be better.  The company will continue to be led by Louise Arnold who is committed to keep the business in the family and continue to provide exceptional care for its residents.

Madeline and Richard Marchand, former directors of Marchand Petit remember David as an important shareholder for the company.

Madeline said it “was through David Arnold’s faith” in herself and Richard in the mid 1990s when he decided to invest in our business, “that Marchand Petit turned a corner”.

“It was a real privilege to have him on board, and as a shareholder at that time of the company, his input was of real importance and indeed helped us to expand in the way we did.

“It was with his backing we opened our office in Salcombe which has since proved to be so very successful. We were also able to have our board meetings at Isobel and David’s home with the very best views over the estuary.

Nick Grodhunce who knew David as a close friend and business associate said David was not only “successful” in business but he was also very “generous with the time he gave to the community” and his family.

“He took great delight in the time he spent with his children and grandchildren creating a family collection of photographs and memorabilia of the times they all spent together.

“Although constantly busy with various business interests, in recent years he and Isobel found time to travel and explore some of the destinations they hadn’t visited.” Nick described David as a “loyal friend and one of life’s gentlemen”.

Janet Turner also worked alongside David on the board of governors at KCC. She said David was a “huge help” as her deputy chairman and when she retired, David became chair for many years.

“He was always quietly considerate, deeply serious, but with a keen sense of humour, and a very wise counsellor” explained Janet. He was “very well respected” by the board of governors with a quiet authority ensuring “fair play” with staff and students.

“His cheery countenance was always there whenever I met him, a true gentleman and a friend to many.”

The funeral will be on Friday 9th March 1pm at Salcombe Holy Trinity Church. The family have asked for no flowers at the funeral but if you would like to make a donation at the service there will be a collection for Prostate Cancer and Salcombe RNLI Lifeboat. The family also wish to thank Salcombe Health Centre and all the medical professionals at Torbay & Derriford Hospital who cared for him during his illness.